Embracing the Pop Nihilism of ‘Anna and the Apocalypse’

The holiday season kicks into gear each December, bringing with it a cascade of wholesome holiday classics. Countless movies depict the “true meaning of Christmas,” usually involving quality time spent with friends and family. But after two years of a deadly pandemic and the rapidly growing political divide, finding this connection seems harder than ever. For many of us, this Christmas will only serve to shine a light on everything we’ve lost. It’s tempting to want to ditch the holiday altogether. But Anna and the Apocalypse offers an alternative. In fact, with its message of hope in the face of grim reality, John McPhail’s zombie horror musical is arguably the holiday film we need this year.

Throughout the film, Anna learns to face the tragedy she’s experienced and find hope in a world crumbling around her. These darkly complex themes are brought to beautiful life through deceptively simple songs composed by Tommy Reilly and Roddy Hart. Lyrical themes, melodic motifs, countermelodies, and tonal shifts all unify the uplifting message while providing haunting but hopeful tunes we can sing along to even though we may be crying at the film’s conclusion.

An early showstopper is “Hollywood Ending,” a catchy pop song where characters bemoan the reality of their love lives in comparison with the fantasies they’ve been sold by Disney. While Anna and John are feeling crestfallen, their friends Chris (Christopher Leveaux) and Lisa (Marli Siu) are desperately in love. During the song’s bridge, the young couple stands on a table and sings in close harmony about the fantasy romance they envision for their future. Their duet shifts to a call and response variation as Lisa sings her desire to spend eternity together and Chris promises to fulfill her request, a fate that will tragically befall them by the end of the film.

During a zombie frenzy in the final act, Chris and Lisa are both bitten. After the attack they stare at each other in horror and heartbreak. A minor variation of their melodic motif plays as they realize that although they will likely spend forever together, it will be as mindless zombies. It’s a devastating reminder that despite the best of intentions, tragedy and death are always lurking nearby. But in the film’s final moments, Chris and Lisa stagger around in a zombified haze lightly brushing fingers as they pass. Maybe all is not lost and the two will maintain a flicker of their love for each other.

“Turning My Life Around” may be the film’s most outwardly hopeful song, but it’s clever staging reinforces the dangers of living in denial. On the morning after the zombie outbreak, Anna wakes up blissfully unaware of the devastation outside. Listening to music on her way to school, she dances and sings her way through a town falling apart. Zombies chase victims out of their houses, cars roll through the streets out of control, and bodies fall from roofs then immediately reanimate.

Through it all, she joyfully sings about starting her life anew on this beautiful day. Anna meets John, also singing and dancing, in the cemetery where they connect over their shared excitement. As they dance towards each other, Anna and John’s movements occasionally resemble the zombies they will soon run from; although they may act lively, they are not truly living in reality. Their bubble of positivity immediately bursts when on the song’s final beat, a zombie inside a snowman costume collapses on the ground behind them.

“Turning My Life Around’ stands in sharp contrast to the final number, “I Will Believe.” After saying a painful goodbye to her father, Anna finds herself surrounded by circling zombies. With no way out, she begins to sing. Her mournful solo set to a stark piano accompaniment reflects on the life she thought she would have, knowing her “perfect” future is forever gone. Though heartbreaking, the chorus’ final lyrics provide the most hopeful message of the film: “But while there’s hope, while I still breathe, I will believe.” Unlike her joyous dance through a zombie warzone, here she has fully accepted the tragedy that has dismantled her life. But instead of hiding from the truth, instead of running from the pain, she chooses to face it and keep fighting for her future.

Anna’s opening verse, sung in the face of certain death, compliments her nihilistic solo in “Hollywood Ending.” Earlier in the cafeteria, Anna looks straight into the camera and delivers one of the film’s most memorable melodies, “This is not the story you’ve been dreaming of / the one where you get all you want / so stop your pretending.” With everyone around her dancing, she is the lone voice of cynical reason reminding us to not get our hopes up too high. Her repetition of the home tone cuts through the exuberant harmonies like a wet blanket stifling the happiness around her. With its similar tone set and melodic contour, the opening bars of “I Will Believe” offer the perfect complement to her cafeteria countermelody. Here, repetition of the home tone carries the air of stability while her ascending melody guides the audience in looking upward for hope as well. Both lyrics accept the reality that life is often unpredictable, but her second melody shows us that we can still find something to believe in. As the delicate piano chords roll, snowflakes begin to fall, signaling a fresh start.

Though eventually cut from the film, the catchy “What a Time to Be Alive” plays over the closing credits. Weaving through the score, its lyrics (“Live for today / ‘cause you might be dead come tomorrow”) perfectly encapsulate the film’s grimly positive message. John and Anna sing a contrapuntal variation during the bridge of “Turning My Life Around” moments before they learn of the zombie outbreak. Its melodies drive the instrumental accompaniment to the zombie battle where Chris and Lisa are both bit, dooming their love to zombified oblivion; its central theme is the instrumental coda of “I Will Believe.” Each time, the song’s incorporation provides a subtle reminder of the film’s message of hope in the midst of incalculable loss, a reality many of us face this holiday season.

Anna and the Apocalypse is not your typical holiday film, but it may just be the antidote for the stifling wholesomeness that feels especially hollow this year. Striking the perfect blend of pop nihilism, the musical reminds us that there is no such thing as a perfect Christmas, but maybe that’s ok. For many of us, this Christmas will be a time to mourn the lives we’ve lost and make peace with an unknown future. Maybe the key to enjoying the holiday is accepting our lives as they are and not what Hollywood tells us they should be. If we can listen to Anna and stop pretending that nothing has changed, maybe we too can find a way to believe. 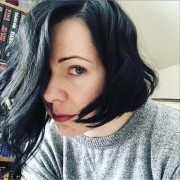