‘The Watcher in the Woods’ Is Smart Gateway Horror As I flipped through channels one Sunday afternoon, my thumb stopped when I glimpsed child actor (now Real Housewife) Kyle Richards in a trance at the bathroom mirror. Richards, about 10 years old – my same age, at the time – is hypnotized by her reflection, repeating cryptic phrases like “nearly too late” and “hardly ever happens.” Her sister Jan, played by Lynn-Holly Johnson, grills her for more information. “What hardly ever happens?” Jan cries, and Ellie (Richards) snaps awake. After rustling through the TV Guide, I learned that this horrifying sequence is from a Disney movie: The Watcher in the Woods. “It looks really scary, do you know what it’s rated?” my dad asked. Surprising us both, it’s rated PG.

The Watcher in the Woods is one of Disney’s darker live-action movies, eliciting a fever-dream quality similar to Disney’s Return to Oz. Made in 1980, The Watcher in the Woods was adapted from Florence Engel Randall’s novel by the same name. The film was from director John Hough, who also directed Hammer’s erotic vampire film Twins of Evil and Disney’s Escape to Witch Mountain. Infamously, Disney was unhappy with the audience reception at the premiere of Watcher and issued extensive rewrites, particularly of the ending. The rewrite process took almost a year and the film was finally released in 1981. This cumbersome editing process inadvertently formed The Watcher in the Woods into an interestingly complex take on a classic ghost story, granting more intellectual agency to its young viewers.

On the surface, the plot of Watcher reads like something out of a Hammer film. An American family moves into a big house in the British countryside owned by eccentric and unfriendly Mrs. Aylwood (Bette Davis), who also lives on the property. While moving in, teenage Jan sees a vision of a blonde girl trapped in a mirror. The girl, who looks a lot like Jan, is blindfolded and reaches out while mouthing “help me” before she disappears. Meanwhile, little sister Ellie begins to hear things whispered in her ear, like the perfect name for her new puppy “Nerak” (“Karen” spelled backwards). Mrs. Aylwood eventually reveals to the girls that her daughter, Karen, died on her 16th birthday. Karen and other local teens were playing a game at the belltower during an eclipse. When lightning struck the bell, the teens scattered, but Karen was never seen again.

In other articles about The Watcher in the Woods (of which there are very few), journalists are quick to point out that despite its PG rating, the film is legitimately scary. Watcher opens with a shot of sunlight peeking through the woods. The score oscillates between a Jaws-like soundtrack and a music box hymn. From the bushes, the camera follows the Curtis family’s car driving down a dirt road toward their new home on Mrs. Aylwood’s property. By peeking through the woods at the young girls and their family, the camera acts both as the “Watcher” and as the audience. This scene wasn’t always in the movie. Originally, the opening shot featured a girl playing with a doll in the woods. This scene was rewritten after Disney ordered edits, and the stalking “Watcher” sequence is what remains, creating an opening that gives a sophisticated homage to the slasher canon.

After her first appearance in the mirror, Karen pops up in seemingly every reflective surface. In one scene, Jan finds herself at the belltower where she sees Karen’s reflection in a coffin. A freak gust of wind causes a stained-glass window to shatter. A perfect circle of a blue glass sun rolls to Jan’s feet, eclipsing another circular piece of glass. In another terrifying sequence, Jan enters a carnival hall of mirrors. The camera aims toward the mirrors, showing rows of an infinite amount of blindfolded Karens. Near the end of the sequence, the camera looks down on a disoriented Jan from above, eclipsing the circular room with the dark shape of the overhead light. Repetition in imagery is often used in children’s media to build memory skills, but here it is used to enforce horror and build suspense to the climactic eclipse sequence.

The final scene itself is essentially repeated twice as Jan talks to different characters, trying to piece together Karen’s disappearance. First, Mrs. Aylwood recounts the night from her perspective. Then Tom Collie – one of the teens who hosted the game – tells Jan his side of the story. In Mrs. Aylwood’s retelling, the kids come running from the chapel. But we find out from Tom Collie’s account that “when the bell came down, Karen was already gone.” This ritual is repeated a third time in the final scene, as an attempt to pull Karen out of the mirror. Jan, acting as a surrogate Karen, invites everyone back to the chapel to perform the ritual again during a solar eclipse. The technique of withholding narrative and switching POV gives young audiences an opportunity to piece together the story as the film goes on, similar to devices used in literary fiction.

For most of the film, the audience assumes that the “Watcher” figure is Karen. She must be watching in the woods, blindfolded in the mirror, and whispering to Ellie. Because that’s how horror works, right? There’s only one ghost.

In the last third of the film, we learn this is not true.

Ellie is having tea at Mrs. Aylwood’s house when she slips into a trance. As Mrs. Aylwood tries to talk to Karen through Ellie, a possessed Ellie screams “No! Not Karen! [I’m] Someone else!” In the final scene, possessed-Ellie tells the group that Karen’s disappearance was a mistake which caused a supernatural entity to swap dimensions with Karen. The “Watcher” is not Karen, but rather, an interdimensional being. Most of the film follows conventions of Gothic horror, but the climax reveals that there are science fiction elements at its core. This adds a layer of genre-bending complexity to the seemingly straightforward film.

When Disney issued a rewrite from the original ending of the film (an alien invasion) to the current ending, the crew was rumored to have over 150 endings prepared for the producers. Was the rushed and chaotic ending a deliberate subversion of formulaic, easy-to-digest horror for kids? No, but it doesn’t seem like the screenwriters are dumbing down the plot either. The result is a movie that expects more from its audience. It treats children like people with agency and intelligence, setting The Watcher in the Woods apart as an excellent and refreshing take on the gateway horror genre. Contemporary Hollywood needs more dreamlike horror that employs complex storylines for young viewers and isn’t afraid to get a little scary. 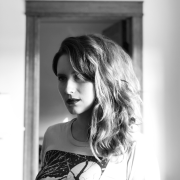 Chloe Waryan (she/they) is a librarian from the American Midwest. Chloe writes about horror movies and books on the blog, Chloe's Not Scared. She also loves to listen to podcasts, thrift, and bike.