‘Pathogen,’ Zombies, and the Preteen Gaze Social media has certainly made it easier for young people to express themselves as filmmakers. Creators on YouTube and TikTok are already familiarized with basic film principles before they even graduate middle school. Earlier this year, TikTok partnered with Cannes Film Festival for a global competition and Ruth Codd from The Midnight Club was discovered through her TikTok popularity. But years before the internet became a legitimate platform to find the artists of tomorrow, a 12-year-old girl named Emily Hagins made a zombie film titled Pathogen. Filmed in the aughts on a camcorder and edited on iMovie during weekends and school holidays, this 66-minute excursion is a delightful ode to horror filmmaking through the eyes of a gore-loving adolescent.

The film opens on a group of laboratory technicians debriefing on a failed experiment in their search for the cure for cancer. When the office custodian — notably played by C. Robert Cargill — accidentally causes a lethal nano-chip to make its way into the city’s water supply, it spreads a virus that mutates citizens into ravenous zombies. We witness middle schooler Dannie (Rose Kent-McGlew) and her band of classmates (portrayed by Tiger Darrow, Tony Vespe, Alec Herskowitz, Alex Schroeder, Estrella Gonzales and Amanda Haight) as they fend for themselves in Austin, Texas. It all culminates at the beloved local grocery, Crestview Minimax IGA, with a twist ending that most won’t see coming.

Hagins caught the filmmaking bug when she saw Lord of the Rings, prompting her to write a letter of adoration to Peter Jackson about how much she loved the franchise. His response led her to attend the Butt-Numb-A-Thon festival, where he was slated to be in attendance. However, it was there where she would see a film that would change her life forever: the 2003 Australian horror comedy, Undead. Despite it being rated R and with enough gore to potentially traumatize a child, it inspired her to make a horror film on her own terms. Not yet old enough to enroll in film summer camp, she volunteered as a production assistant on independent features under producer Rebecca Elliott. Now with more experience under her belt, Hagins began writing the script for Pathogen at the tender age of ten.

The narrative aligns itself with the familiar group survivor setup, but is uniquely told through childhood fears in relation to school, family and friendship. Tonally it takes itself seriously, aiming as a gruesome horror complete with practical effects in eye gouging, stabbings and a decapitation scene, but has a comedic flair due to the awkward-yet-endearing performances of the young cast and dialogue. One observes how the characters are represented as intelligent and capable without the assistance of parents and never convey true terror, save for the occasional zombie grab.

When a child creates a film, some are swift to overlook it as amateur or child’s play, but Pathogen is much more sophisticated than your average home video. There is a careful attention to the codes and conventions of the genre, a driving ambition and an authentic voice that forgives any technical mishaps. It’s clear this isn’t a low-stakes experiment for her, it’s a passion project she’s fully invested in and one that was awarded a grant from the Austin Film Society’s Texas Filmmakers Production Fund. Hagins is the embodiment of an intrepid leader limited only by lack of experience, who knows exactly what she wants and isn’t swayed by suggestions from adult collaborators if it isn’t suited to her vision. This separates the film from the unedited footage you would commonly stumble upon in the far reaches of YouTube.

We see this self-confidence and preparation in the documentary, Zombie Girl: The Movie, directed by Justin Johnson, Aaron Marshall and Erik Mauck, a must-watch to accompany the film. It offers a peek into the genesis of Pathogen and the arduous operation of being a young director striving for autonomy. There are multiple instances with her mother, Megan Hagins, in which they have creative and logistical disagreements. During a shoot, she pulls the plug on the night against her wishes and in another, calls cut on a take without her permission. Concurrently, we empathize with Megan as a parent in spite of disparities. She’s employed full-time, is shouldering multiple roles on-set (such as boom operator with the microphone taped on a paint roller stick) and still manages to find energy to support her daughter’s dream to make a first feature.

Hesitance towards Hagins’ leadership due to age continued beyond the production. When the film premiered at the Alamo Drafthouse, an audience member asked, “How much did your parents spend on all of this?” and followed up with, “I have a question for your parents.” They don’t appear to ask this to undercut the creative authority of Hagins, yet it still highlights the inequalities young creatives face in respect to their adult counterparts across the industry. An interview with then 13-year-old actress and executive producer Marsai Martin (Little) elaborates on this problem, “Yes, people did tell me I was too young and can’t do this like a lot of people do. They still do. But no.” She has since been named one of the most influential people in the world by Time magazine.

It’s a fight Hagins has expressed deep passion for. In a 2008 behind the scenes clip, she discussed potentially writing a book based on her experiences to provide value for aspiring teenage filmmakers. “This and the book I think will help, hopefully help other teenagers with their movies so that we as teenage filmmakers can be awesome and not just like, ‘Oh that’s good for a kid’ but be like, ‘Oh that’s a good movie.’” In the documentary, her father Jerry Hagins says he’s unsure if this is a phase and it remains to be seen if she’ll decide to continue on this path. Sixteen years later, Hagins is still thriving. Her latest horror comedy, Sorry About the Demon, screened at FrightFest and is anticipated to release on Shudder later this year. Since then she has already directed multiple features and projects including Netflix’s Coin Heist, the “Cold Open” segment of Scare Package and for SnapChat’s episodic series V/H/S. Quite an exemplary resume for a director who authored many of her works while she was still in high school.

The importance of Pathogen and Zombie Girl: The Movie manifests as more than just a nostalgic document of a burgeoning filmmaker. It’s a significant contribution towards the children’s horror genre and the study of children as filmmakers, as Hagins wore multiple hats as director, producer, writer, cinematographer and editor. Inadvertently, it asks adults to re-evaluate the way we see children, as more than just ‘becomings’ or people who do not yet have valid opinions or the ability to be responsible (Alanen & Mayall, 2001).

And so Pathogen deserves to be remembered as a charming, all-ages version of One Cut of the Dead, a love letter to the pursuit of genre filmmaking in all of its joys and tribulations. Pathogen proves that anyone can make a film, at any age, as long as they put all of their heart, blood and guts into it. 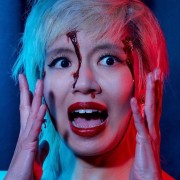 Xanthe Pajarillo is a director-writer and Air Force veteran from Germany and Virginia. She directed the 2021 Fangoria Chainsaw Awards, co-hosts the Kindergeist Podcast with her 14-year-old niece and has written for Bloody Disgusting, Fangoria and Ghouls Magazine. She holds an MFA from USC School of Cinematic Arts and a BFA from CalArts.