Revisiting ‘The Girl in the Photographs’ Five Years On Before The Girl in the Photographs was shown to mass audiences on April 1, 2016, it had the distinctions of Wes Craven’s name as executive producer, Dean Cundey’s masterful cinematography, and a screening in the Toronto International Film Festival Midnight Madness category. Unfortunately, initial buzz wasn’t a legacy starter for the film. Its release model didn’t help either—limited theatrical distribution was paired with a video-on-demand “dump,” more of a scarlet letter at that time than in the current streaming ecosystem.

Why look back at this film at all if it was meant to be buried from the start? Because it’s a misunderstood and particularly trenchant meta-horror film that deserves to find an audience. While internally conflicted by both straying too far and holding too close to genre conventions, The Girl in the Photographs contains a satisfying tension as an exposé on the nature of horror viewership.

The postmodern horror era can be defined by its shift into the self-reflexive, “meta” style of cinema. Think evergreen examples like Scream, Shaun of the Dead, and The Cabin in the Woods. These films aim their subversion of the genre more at the textual level by using irony, satire, and/or parody to hold up their mirrors. The Girl in the Photographs works toward the same end as these films. Humor and irony are employed in its commentary on the predatory nature of photography and the modeling industry through dialogue and the Dov Charney-mimicking Peter Hemmings (Kal Penn). These references are an oblique reveal of the self-dissection the movie is performing.

However, The Girl in the Photographs does not use irony or humor to get to its deepest interests. It hides the critique of horror in plain sight by placing a more direct target in front of viewers. By using cruelty, the film implicates the system of consumerism that holds our visions of ourselves and each other in check. Cruelty here does not mean only individual violent and degrading acts. It can also mean a stripping away of barriers between art and spectator (as expressed in avant-garde playwright and actor Antonin Artaud’s “Theatre of Cruelty”). For a cinematic parallel, this is similar to Michael Haneke’s technique in Funny Games (1997; 2007). Although Girl employs a less dialectical approach than Haneke’s fourth-wall-breaking sociopaths, its first goal is to destabilize the postmodern horror film; the rest of culture can follow after.

The film begins by demonstrating that it is a commentary on the horror genre by emulating (in a lower register) Scream’s successful cameo opening sequence. This time, the woman in peril, Janet, is portrayed by a horror icon specifically (Katherine Isabelle of Ginger Snaps and American Mary). The first dialogue of the film is hers: “Never again, no horror movies.” Her death is made inevitable in these first moments. We know, because Scream has made it so, that she is to be the first victim. We know, because the poster makes it clear, that a masked threat will stalk and kill her.

The film does not follow the exact slasher pattern of stalk and kill. It twists the subgenre by adding a prolonged middle event—stalk, torture, and kill—to make the victims more horrifying to behold. This follows philosopher Julia Kristeva’s concept of abjection, which does not adhere to borders between subject and object. The killers first abduct Janet from her home and then drive her to an isolated road. There, they restrain her and take photographs of her struggling in terror. The camera is shown as the object doing the “killing.” We do not see the murder until its results are revealed as an anonymous art piece—a creepy Banksy if you will—to protagonist Colleen (Claudia Lee). The killers repeat this pattern, confining within a basement cage another young woman, and later, Colleen’s ex-boyfriend. In these moments, it crosses the genre border to emulate the “true crime” thriller style of The Silence of the Lambs or Henry: Portrait of a Serial Killer.

So things go until the final act when the killers enter the home invasion subgenre and move on to more efficient bloodletting. They dispatch five people in under 20 minutes as the ultimate climax, and the movie starts to feel like the slasher we expected early on. This third act is designed to create the most abject experience the killers have been saving for their anti-Final Girl, Colleen. Although there is no violence to confirm her murder, we know that Colleen does not survive. The film rejects the Final Girl trope in order to express the theme that everyone is both implicated and doomed under the consumerist gaze.

We know that, because there is no Final Girl to prevent it, the movie must set up a continuation. The killers pass on the photograph of Colleen’s abjection—still alive but surrounded by the corpses of the photography crew that was meant to rescue her—to the next would-be victim, Britney (Christy Carlson Romano). The movie here emphasizes its circularity in a different way. It not only continues the cycle of murders, but it directly brings us back to the beginning of this very movie; Britney is introduced within the opening minutes of the film as Janet’s friend, the last person to see her alive. It questions the cycle of slasher movie viewership as a passive activity. The inevitability of the plot and its outcomes are drawn together here, and we know that Girl will come to the same fate as her spiritual cinematic sisters.

With a more serious appeal to the subversive side of horror, perhaps where the movie fails to find its audience is in its packaging as entertainment. Yes, there are funny moments; there is carefully crafted suspense; there is gorehound-satisfying violence. But The Girl in the Photographs is ultimately vicious and stark. It does not allow for catharsis. It lulls with expected tropes and then transgresses them, becoming the abject experience it exposes through its victims. It crosses subgenre boundaries indiscriminately, and in doing so, it folds in the preceding two decades of horror as it aims its knife right into the genre’s heart. 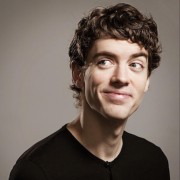 Kevin (they/them) is a writer, performer, and curiosity who utilizes text to create performances, performance to create text, and both to create responses that provoke inquiry and participation. They also are a current co-coordinator of the monthly artists’ salon series, HI typ/O, and served as Production Manager for the IN>TIME Performance Festival in Winter 2016 and Assistant Director of the Out of Site Performance Series in Summer 2015.