When women in horror come of age, they experience a unique rite-of-passage. The onset of puberty has a storied history in the genre; in Carrie and Ginger Snaps, newly-discovered power arrives with the first menstrual cycle for both protagonists. The ability to birth children in Rosemary’s Baby finds its lead pregnant with the antichrist and in The Fly, Veronica (Geena Davis) carries a half-insectoid fetus to term. Once women cross that boundary into adulthood, they venture off the map of normal human existence. When women become capable of mothering, they deviate from the bodily norm. They become monsters.

“When a woman is presented as monstrous it is almost always in relation to her mothering and reproductive functions,” writes horror scholar Barbara Creed. What awaits those same women, evolving from monstrous origins, as they grow older? They disrupt social boundaries. They antagonise the troublesome concept of a “default” human experience, a rebellion which occurs in cinema without their consent.

The Alien franchise, which began with Ridley Scott‘s 1979 film Alien, makes no bones about its ambition to accomplish that same goal (albeit from a different starting point). Screenwriter Dan O’Bannon has described his film as “payback” for the wave of early 1970s rape-revenge movies, one where men live in fear of being penetrated. The facehugger clings to Kane’s face against his will, forcing its proboscis down his throat, implanting an alien egg which gestates inside his body until it cracks through muscle, ribs, to emerge as a chestburster. This unorthodox approach to reproduction—and to birth—through human violation threads the franchise. The point made is explicit.

“I am going to put in every image I can think of to make the men in the audience cross their legs,” O’Bannon once explained in The Alien Saga. But as the franchise progressed, O’Bannon’s self-styled attack on men fell flat. This tactic, an attempt at horror equity, changes later in the series, as if no new terrain exists and the only place left for women to occupy is that of a monstrous mother.

In subsequent films, something more terrifying takes command of its women. No longer on the cusp of adulthood, women are broken down and remade into new, more transgressive monsters that only permit certain functions. Ellen Ripley‘s (Sigourney Weaver) death at the end of Alien 3 feels inevitable—she isn’t an active mother, not to her biological child who died on Earth or her adoptive one, Newt, who drowned in her sleep. Without the ability to perform that function, she is redundant. The only way she’s brought back is to become the literal mother to a monster in Alien: Resurrection. Ripley’s death is a choice snatched from her when the US government—can’t even blame it on a shady corporation anymore—clones Ripley to get its hands on the alien queen embryo nuzzled in her chest.

Not only is Ripley resurrected against her consent—revoking even her agency to stay dead—she’s forced into the role of mother against her will. Ripley 2.0 might be stronger and have acid blood now she’s enmeshed with the xenomorph’s DNA, but make no mistake: she depicts an inhuman mother to an inhumane thing. She’s a mother to the alien xenomorph and the alien xenomorph’s offspring.

Ripley’s journey at this point is remarkable. Having transgressed the final boundary humans will ever experience, she’s yanked back to life, an unwilling participant in an experiment to remake the alien. Given her repeated attempts to kill this thing, she’s denied the peace of finality—instead, she is also remade, again and again, in the government’s attempt to clone her and the creature. Midway through the film, Ripley discovers seven deformed versions of herself—half-human, half-alien—in an emotional scene. Most are dead, suspended in liquid. One remains alive, a xenomorph-human wearing Ripley’s face, who begs Ripley 2.0 to kill her. A mere taste of the abject horror that awaits her successor.

The character of Elizabeth Shaw (Noomi Rapace) in Scott’s prequel films, Prometheus and Alien: Covenant, is subject to the same treatment—and the same disregard over her inability to reproduce. “I can’t create life,” she says to her partner, with whom she then immediately has sex, and whaddya know, creates life. But we’re not talking about a human life here: she’s violated as Charlie (Logan Marshall-Green) is unknowingly infected by a black antigen. Now she is pregnant, but with a creature that threatens her life, which she then has to surgically remove. Her offspring known as the Trilobite facehugs an Engineer and creates an ancestor of the Xenomorph. In essence, Shaw—like Ripley—is mother to a monster.

And her reward, once she’s fulfilled that prerequisite? She’s killed by android David (Michael Fassbender) as part of his misbegotten plan to create life. The savagery—the brutality of what he does—extends far past the need to kill her for organ harvesting, but he attempts to make her “more than human, evolved.” The results are glimpsed in deleted scenes featuring a truly horrific transformation of Shaw: sliced open, bones protruding from her temple, chest split clean, alien biology supplanting her fragile human frame. David fails to keep her alive, but the gruesome experiments with her remains lead to the creation of the xenomorph.

The system by which the Alien women are all treated is a cycle. David creates the alien through violating Shaw, the progeny of that creature attacks Kane, and journeys alongside Ripley, eventually becoming a part of her biology as it began with Shaw. Elizabeth, unwillingly, becomes a monstrous mother to Ellen.

The Women of Annihilation

The women of Annihilation, Alex Garland‘s 2018 film, experience the same treatment by an alien power. After a meteor hits a lighthouse located in a Florida state park—its impact unleashing a paranormal, biological change upon the swamp landscape—a group of five women scientists enter the surrounding area. An opalescent, impossible light coats the terrain; this is a space known as The Shimmer, where time refuses to obey laws and the fundamental tenets of science crumble.

The team we follow are aware of The Shimmer’s effects; except for one person, none of the previous crews who ventured into the zone returned. The women, Lena (Natalie Portman), Ventress (Jennifer Jason Leigh), Cass (Tuva Novotny), Josie (Tessa Thompson), and Anya (Gina Rodriguez), enter it willingly. Granted, they’re one of dozens of missions into The Shimmer, but the film charts this specific expedition. They’re all broken women. They no longer possess attributes associated with being a woman. No longer are they mothers or wives. They’re the forgotten ones, shuffled to life’s periphery through infidelity, loss, disease, and isolation. All of these women are hopeless, unmoored from purpose and only too willing—as Ventress puts it—to “self-destruct.”

While inside The Shimmer, Lena notes that all plant and animal life is “stuck in a continuous mutation” which recycles all accessible nearby particles, be it physical or mental. Cass has the indignity and trauma of her dying moments mashed together with the creature that killed her. A terrifying sequence involves her killer—a mutated bear—stalking the remaining women, its reassembled self having assimilated Cass’s dying screams into its voice. “Help… me,” her voice cries, wrong in the bear’s throat.

“Imagine dying frightened and in pain and having that as the only part of you which survives,” Josie comments in the aftermath. She recognises the entropy headed for all of them, a transgression into something unknowable before their inevitable ends. Josie is enveloped by nature, a humanoid flowering tree. Ventress flooded with light, snaps away like embers in the wind.

Over the course of the film, these women are dismantled, ripped apart on a genetic level by an alien ecosystem, reforged against their wishes. Ventress’ final words before she bursts apart summarise the action within The Shimmer: “Our bodies and our minds will be fragmented into their smallest parts until not one part remains…Annihilation.”

As for Lena, a droplet of her blood spills into the mouth of the psychedelic swirl left by Ventress’ death. Out from the cyclone emerges a blank simulacra, a sinister doppelganger taunting Lena, later destroyed by a grenade.

Lena technically survives—as evidenced by the flashback sequences—but she’s not the human who first entered The Shimmer. It’s as if the only way to forge a path back to her marriage is by not being the original Lena, by being something else, some remixed version. The only way to “atone” for her infidelity, to return to Kane, who also is not himself, is through being annihilated, and rebuilt alien and monstrous. In the final scene, her husband asks, “Are you not Lena?” with a hopeful lilt to his tone. Maybe the real Lena might not have made her way back—instead, something else has come in her stead, something better suited to him.

Both groups of women, Ripley and Shaw from Alien and Lena’s group in Annihilation, become monstrous as a way to somehow address their failings as adult women. It’s as if once women reach a point, their first steps into monstrosity—the coming of a period, the having of a baby—telegraph more abjection to come. They make their way forward, onto fresh terrains, where the only thing waiting in adulthood is more monstrosity, whether they want it or not. 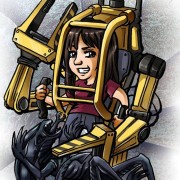