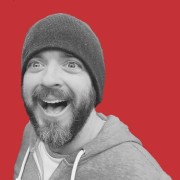 Rob Hunter's writing can be found in places like Slashfilm, Thrillist, and Crooked Marquee, but it's Film School Rejects/One Perfect Shot that he calls his online home. As the site's Chief Film Critic he covers films from all sources including theatrical, VOD, home video, and film festivals like Sundance, Fantasia, and Fantastic Fest. The bulk of his top ten favorite films fluctuates on any given day, but his number one has remained the same for over two decades and it's Broadcast News.