Who wants to live forever? Neither critic and podcast host Ryan Oliver or the Matts. That’s why they hopped over to Shudder and pressed “Play” on Dominik Hartl’s criminally not-talked-about Euroslasher, Party Hard, Die Young. From the director of Attack Of The Lederhosen Zombies (M.D. edit: which rules) comes a throwback 80s rave-until-you-croak flick that’s responsibly modernized. Still about young kids making dumb decisions and paying the price, but minus the outdated ideologies of once-popular midnight titillation.

As American horror continually strives to recycle nostalgia, overseas genre content has looked to update the practices of old. Those who crave their slasher fix should start here, then work through Cold Prey (which we covered), Cold Prey II (which we also covered), and Lake Bodom. But let’s focus on one film for now.

In this Certified Forgotten episode, Mr. Oliver and the Matts dig into the “death” of slasher cinema and its future rise from the ashes. Specifically, what Party Hard, Die Young gets right about crafting slashers in our current global climate. Some say that you can’t release slashers anymore, but that’s incorrect. Just because a subgenre has to evolve to survive, doesn’t mean said subgenre is gone. Scream simultaneously redefined and murdered the slasher subgenre. It’s ready for a second coming. Third coming? Another coming!

“The Ocho” is one of those rare early episodes where the title watch was a first-timer for both our guest and Matt Monagle, who ended up equally approving Hartl’s neon-lit killing spree. While the podcast was still picking movies per episode, I got pretty good at recommending new watches for incoming guests. Party Hard, Die Young might have been one of my best alignments, which comes out in our conversation. I mean, I’m quoted on the blu-ray cover, so my allegiance was never in question – but anyone who’s ever recommended a movie knows the anxiety that follows. Luckily, this one paid off.

Party Hard, Die Young is now available to stream on Shudder. You can also rent it on Amazon, Google Play, and many other streaming platforms. 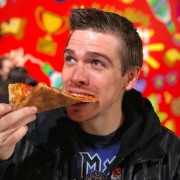