‘The Laplace’s Demon’ Finds Fear in the Inevitable The bloody hand of fate has always been—and will forever be—a prevalent storytelling theme. In the ancient Greek tragedy Oedipus Rex, our protagonist fulfills the prophecy of killing his father and marrying his mother despite futile attempts to escape. The shipwrecked king Ajeeb in the folk tale collection One Thousand and One Nights found himself unable to save the king’s son, whom astrologers had prophesied would be killed by none other than Ajeeb himself. In The X-Files episode “Clyde Bruckman’s Final Repose,” the titular Clyde is tormented by his ability to see the others’ future deaths, unable to do anything about it. The Final Destination series and its spectacular deaths drive home the ultimate lesson: if you are supposed to die, you will.

One of the most unique additions to this tradition as of late? The Italian sci-fi horror puzzler The Laplace’s Demon. In this 2017 horror film, director Giordano Giulivi explores determinism from a scientific angle while adding his own unique visual style.

Pierre-Simon Laplace was a French 18th-century polymath who—apart from contributions to mathematics and physics—also formulated the idea of an omniscient, allegorical “demon.” Laplace asked his readers to imagine that this intelligence knew the location and momentum of every atom in the universe. With this, the demon would be able to predict the state of the universe, both future and past. The world could be thought of as one giant clockwork, every piece of machinery causing the motion of the next.

According to these principles, humans are just the result of an inevitable series of events without the power of free will. Of course, that rests on the foundational prerequisite that reality is deterministic, meaning that cause and effect are certain. Modern physics put that concept to rest long ago, but Laplace’s thinking serves as a starting point for discussions on fate and free will. It was precisely this that inspired Giulivi to embark on a seven-year journey to make The Laplace’s Demon, bringing with him a small team that split the responsibilities of screenwriting, cinematography, music composition, and (of course) acting. The result is a spooky and suspenseful story, marvelous to behold.

The Laplace’s Demon exhibits incredible patience on the part of Giulivi and his team. The entire film was shot in a single space no more than approximately 13×13 feet, using almost exclusively rear projection. This classic technique has long been discarded in favor of green screen and advanced digital special effects, but it used to be the established technique for in-camera compositing. The idea behind rear projection is that background footage is shot separately, then projected from behind—mirrored on a large screen that serves as a backdrop for the action that happens in the foreground.

A classic and well-known example seen in many older movies is someone driving a car, the road and landscape rolling along in the rear window. The illusion is often imperfect—road, car, and steering wheel moving out of sync—but both good enough to pass and safer to work with than shooting a real drive. The Laplace’s Demon blows that “good enough” quality out of the water by painstakingly matching movement, lighting, and perspective to the point where seeing the actual set in behind-the-scenes footage is hard to initially grasp.

Giulivi is no stranger to computer graphics and compositing, having done this work in both The Laplace’s Demon and his previous feature film, the sci-fi satire Apollo 54. But opting for rear projection in almost all scenes—only a few wide and outdoor scenes used green screens—allows these very modern techniques to morph into the classical look that he was after. The film is in black and white, using a lot of contrast between shadows and light, making it reminiscent of film noir or even Fritz Lang’s German expressionism. Giulivi has stated that major inspirations were Alfred Hitchcock and René Clair, the latter known not least for his adaptation of the Agatha Christie novel And Then There Were None. Its plot recalls The Laplace’s Demon since a group of strangers is invited to a lonely island by a mysterious host only to be killed off one by one. In Giulivi’s film, however, the killer is not a person but fate itself.

Plotwise, this is a clever touch that transforms The Laplace’s Demon from something you have seen before into a one-of-a-kind masterstroke. There is an almost slasher quality to the group of visitors falling prey to an unknown perpetrator, but no knife-wielding killer roams empty hallways. Instead, there is an inanimate death mechanism engulfing the poor victims, all according to a mathematical formula. You would think knowing that equation is of help, the resulting actions are even played out in full view inside the miniature house replica the group discovers on their arrival. The equation is all-encompassing, moving along like Laplace’s clockwork, not leaving any chance at choice. These people are determined to die no matter how they try to subvert the situation.

The Laplace’s Demon borrows exactly the right amount of its plot from famous whodunits and places itself at just about the right level of similarity to classic suspense cinema. Adding a decidedly uncommon level of complexity and philosophical dimension to the story and a truly impressive aesthetic, the film transcends what you would typically think of as low-budget horror. It shows that a solid and special idea, with a style of its own, is what can set an indie genre film apart, making it much more memorable than even the most sophisticated and expensive blockbusters.

Giulivi has consistently maintained in interviews that the overarching principle in the team’s work with The Laplace’s Demon was this: the story above all else. No amount of cinematic finesse can save a poor plot. Hopefully, independent filmmakers on this same path can feel validated by Giulivi’s words. There’s no need to emulate the mainstream to find your audience. Among hidden horror gems, some of them with a far greater budget than The Laplace’s Demon, there is a reason this one stays on your mind.

Should the film find wider distribution on the streaming or home video markets, Giulivi and his tenacious collaborators may finally get the international attention they deserve. The Laplace’s Demon could become a classic among arthouse murder mysteries, instantly recognizable by its grand style. Maybe that would also open some doors for a director that shouldn’t have to spend another seven years on his next film. Giulivi clearly has a fascinating mind; may he continue to be drawn to thought-provoking horror films by the hand of fate he so often captures on screen. 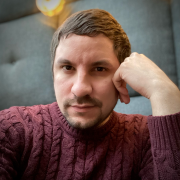