Why ‘Deadly Games’ Is the Horror Fan’s ‘Home Alone’ A year and a half before Home Alone (1990) captured viewers with a comedic take on the horror movie home invasion plot, a similar story played out in a French film. Kevin McAllister was not the first left-behind kid forced to defend his home with elaborate traps against an intruder during Christmastime. Before Home Alone was released, mulleted child prodigy Thomas de Frémont (Alain Lalanne) fought for his life against a psychopathic prowler dressed like Père Noël in the French horror-thriller film Deadly Games (1989).

Horror movies sound fundamentally opposed to Christmas. Images of blood and gore diametrically contrast thoughts of sugarplums dancing in our heads during the holiday season. But the horror-slasher-holiday film subgenre has quietly endured for over four decades thanks to the success of films like Black Christmas (1974). When horror streaming service Shudder added Deadly Games in 2019 and the film received a 4k/Blu-ray release in 2020, the forgotten film found its much-deserved recognition.

Written and directed by René Manzor, Deadly Games begins with a similar violence/comedy amalgam in the same vein as Home Alone. Protagonist Thomas de Frémont dresses in camouflage and paint stripes emulating the 80s action movie heroes postered on his wall. The camera follows Thomas as he speeds through his mansion like Rambo or Snake Plissken, rigging traps and using his high-tech camera system to monitor every room in the lavish mansion. Fast camera cuts, slow-motion, and extreme close-up angles mimic the machismo mise-en-scene Thomas adores.

In the next scene, Thomas hilariously pretends he is an authority figure and his near-blind grandfather, Papy (Louis Ducreux), is his prisoner as he escorts the elderly man to his mother (Julie de Frémont) at the breakfast table. Manzor expresses volumes about Thomas’ character through the cinematography and dialogue contrasted within the films’ first few minutes.

Both introductory scenes convey comedic whimsy through a child’s perspective. The complex traps Thomas fashions demonstrate how his intelligence surpasses the average pre-prepubescent. Even though he still engages in child-like behaviors, Thomas’ concept of “playtime”, his affection for Papy, and his interactions with his mother communicate his maturity. Deadly Games centralizes around this theme of maturity. Under dreamlike, hazy lighting, he first questions the reality of Santa Claus. The liminal space between childhood and adulthood disarms his expanding belief system.

This initial internal conflict—where Thomas wonders whether he should still believe in a fantasy figure—functions as the inciting event in Deadly Games. As the film descends into the horror analogous to its holiday season slasher movie predecessors, Thomas must forcefully confront his disintegrating faith in childhood fantasy.

Deadly Games’ antagonist appears on screen in the opening credits scene, eerily foreshadowing the dread imbued into the marrow of the movie. Snowflakes flutter as children pelt each other with snowballs on a bright December day. The camera starts at a wide shot angle, leisurely zooming in on the innocent playtime. Suddenly, the man who will take on the murderous “Père Noël” mantle appears in the frame and interrupts the warfare. Simply by engaging in a child-like activity with minors, viewers feel uneasy. Cinematography here stimulates a flurry of terror, cutting to the children running away from the questionable adult. A lingering mid-frame shot lingers on the man’s wounded look. Père Noël’s presence saturates the film with trepidation and a thematic loss of innocence.

By the time Père Noël forces entry into Thomas’ home, he proves himself a serious menace. Part of what makes Deadly Games utterly devastating lies in how Thomas believes the intruder is the real Santa Claus. Thomas’ quest to validate Santa’s existence leads him to contact the Père Noël imposter through an online messaging system.

The cinematography again employs shot-reverse-shot camera angles to exemplify Thomas’ animated facial expressions juxtaposed with the predatory nature of the messages on his computer. Thomas eagerly messages the man he thinks is Santa. However, his friend warns Thomas how pedophiles use the messaging system inappropriately. Aware Thomas is trespassing into alarming territory with the disturbing chat, his friend eventually compels Thomas to log off. Sinister music plays as the next shot chillingly exposes the man from the snowball scene on the other end of the chat.

Père Noël uses the sparse information Thomas provided to track down Thomas’ mother Julie. After interviewing for a job as a mall Santa at her store, a shocking scene where Père Noël slaps a little girl shatters the sacred comfort boundaries audiences are accustomed to seeing in a film featuring children. Julie subsequently fires the man. Unfortunately, the vengeful Santa’s connection to Julie steers him straight toward Thomas. Deadly Games shows its adult villain is capable of violence in his rage against his longing for youth. With an antagonist who views violence against little kids as a tenable option, apprehension over Thomas’ fate permeates every remaining minute.

Slow-motion mingled with fast-cut film editing evokes inescapable nightmare sensibilities as Père Noël and Thomas play a deadly game of hide and seek. Thomas casts off his innocence. He adopts the role of a mature adult to ensure his grandfather survives. Their touching relationship adds sentimentality and furthers audiences’ empathy. Further, the child actor escalates tension as he outwits the metaphorical visage of his childhood convictions through his hauntingly convincing emotional range. We root for Thomas’ brutal retaliation — more so than we root for capable adult action heroes.

Stakes are considerably higher for Thomas in Deadly Games relative to Kevin in Home Alone. Deadly Games espouses horror film conventions as it eases into its second act, detaching itself wholly from the first act’s introductory humor. The instant a Santa-like figure poses a threat to Thomas and his beloved, physically ailing Papy, the tone shifts from action-parody into petrifying drama. Realism amplifies palpable terror beyond even comparable horror films. Not only does the film place a child directly in peril, but home invasion movies magnify fear subconsciously.

Steeped in violence and exploiting some of our most childhood moments, Deadly Games is a fitting entry in the Christmas-horror genre that birthed it. Humans fear home break-ins in the real world; Manzor has capitalized on that fear to present an effective exercise in augmented holiday-horror festiveness. Visually innovative and superbly acted, it’s time to start stuffing stockings with Deadly Games at Christmastime. Stomachs will churn as these dark visions of sugarplums come to life. 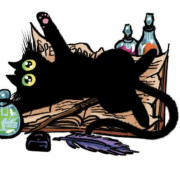 Katie is a writer, skateboarder, and basketball player from California. She loves to write about books, comics, music, and film online.