‘Brainscan’ and the Paranoia of Video Game Violence In 1994 there was nothing more scary than the specter of video game violence. Technology-based horrors are nothing new, but the mid-90s offered up a timely and extremely specific subgenre: the VR-horror film. John Flynn‘s Brainscan (1994) encompasses a very specific—and essentially harmless—fear of video games that haunted the minds of parents and the American media.

An evolution of computer genre flicks like The Lawnmower Man and Ghost in the Machine—as well as a precursor to the many internet horror movies that would follow—Brainscan is an especially interesting entry into the tech-horror canon. Unlike its counterparts, this film presents a very literal adaptation of the fear that fictional violence could become horribly real.

The panic around video games peaked in 1993. After the releases of Doom, Mortal Kombat, and the ridiculously campy Sega live-action game Night Trap, the United States Senate Committees on Governmental Affairs and the Judiciary held a series of congressional hearings about the dangers of video game violence. Echoing the precedent set by the notorious Wertham hearings—which saw the comic book industry establish a self-censorship body in response to claims that comics were corrupting the youth of America—the 1993 hearings focused on the danger of realistically representing violence in video games.

The outcome of the hearings led the gaming industry to create the Interactive Digital Software Association, which would later lead to the invention of the Entertainment Software Ratings Board in 1994.

Brainscan came out in the months preceding the creation of the ESRB. As a result, the film directly reflects the most scandalous claims of the congressional hearings and parents groups everywhere. Edward Furlong stars as Michael, an isolated teenage horror movie fan who’s always looking for the next extreme thrill. His father’s huge mansion is home to Michael’s basement, a comfortable dungeon where the high school student sequesters himself away from the rest of the world. Not only is he a loner—classic gamer trope—but he also spies on his hot next door neighbor.

His insular life takes an unexpected and potentially fatal turn when he sends away for a new immersive virtual reality game called Brainscan, which promises to be his most brutal and personalized gaming experience yet.

At first, Brainscan is surprisingly dark. The game Michael plays begins with a strange swirling on the screen that appears to hypnotize the player and cause his avatar to commit brutal murder during his first voyage into the virtual reality system. But the horror comes when he realizes that the murder he committed in the game actually happened. There’s a bleakness to that reveal, one that could easily haunt and horrify, but instead director John Flynn and writers Brian Owens and Andrew Kevin Walker go in a different direction.

The introduction of the Trickster (T. Ryder Smith) takes Brainscan into solidly silly territory, even as Michael becomes connected to a series of murders and is hunted down by Frank Langella‘s cynical Detective Hayden. The practical weirdness of Trickster—and Michael’s virtual reality experience—immediately brings to mind Paul Verhoeven‘s class war action masterpiece Total Recall, which makes a lot of sense when Brainscan finally reveals its hand.

Before it gets there, though, the film wants us to be scared of the loss of agency that Michael suffers. This is not a psychological reaction to the game—there’s nothing so deep here. Instead, Trickster is a physical manifestation of the “bad influence” parents and censors were so worried about. Here’s a near-mythical creature that tempts your children with the promise of escapism and adrenaline, only to trick them into committing violence.

Just like the original argument that fictional violence causes real violence, the existence of Trickster takes away any parental culpability, instead laying sole blame on the games and their terrifyingly omnipotent ability to cause violence in their innocent and uncorrupted offspring.

It’s interesting how Brainscan also foreshadows the fear of the internet; the vast unknowable world and dangers that it represented in the 90s. While Trickster is a totally ridiculous reinterpretation of classical figures like Loki, in the tech-heavy world of the movie, he can also be read as the “dangerous stranger.” Which was, and still is, a key part of parental fears around web usage. Never knowing who’s at the other end of a chat window, or monitor elsewhere. A figure we were all taught to be afraid of, Trickster lures Michael in with lies, only to put him in danger and use his trust to cause all manner of harm.

Although the “stranger danger” part of internet fear wouldn’t become common until a fair few years later when people began to have easy access to the internet in their homes, it’s really interesting how interchangeably this analog for the panic of video game violence could have been reused to showcased the fear around the horrors that lay on the world wide web.

The actual mechanics of Brainscan are revealing too. Of the games that caused the North American congressional hearings, this is closest to Night Trap. That game featured a live-action movie of kids being killed by vampires, that the player could stop by watching via CCTV. It’s probably the least well-known and least notorious of the games, but it’s definitely the easiest to put to screen. In the original Mortal Kombat game, the avatars were glitchy and adapted from computer generated images of real fighters, giving it an always unreal feel.

But in Brainscan, Michael’s violent experiences within the game always look as if he’s actually there, making it feel far more real (and less like a videogame). It makes sense narratively, but ages the movie in a unique fashion; many remember the shock around the brutal fatalities of Mortal Kombat, but only a few horror-gaming diehards recall the story of Night Trap.

Much like the arguments and scandal that inspired it, Brainscan doesn’t actually feature a child turned evil by video games. In a final act twist that takes the controversial Dallas “it was all a dream” device and skews it towards gamers, we learn that nothing that happened since Michael entered the game was real. The actual experience of playing Brainscan comes from the program reading what your deepest fears are and crafting a narrative around them. In Michael’s case, this was the violence that he committed in the games becoming real.

Although we saw him kill and eventually get killed, those events all took place within the game, and Michael wakes up absolutely fine. Now, though, he is fully aware of the powerful computer-generated narrative he has experienced.

It’s a strangely lighthearted—and extremely tropey—reveal, especially after the brutal death Michael suffers at the hands of Langella’s detective. But it makes sense if we think of Brainscan as two different movies struggling for dominance. One is a grimy B-movie that explores a loss of agency while trying—and failing—to get away with a heinous crime. The other is a PG-13 sci-fi parable about the danger of falling for the lies of others, especially strange, demented men you meet in the gaming world (or as it would come to be years later, on the internet).

Ultimately, the final reveal works as a fitting—if unintentional—commentary on the nature of the hearings and the panic around video game violence. Michael’s experiences, though terrible and scary, are simply based on his own fears. Just as the imagined horrors of video game violence seemed terrifying to worried parents everywhere, the events of Michael’s narrative are entirely imagined. Somehow, the fabric of society remains intact. 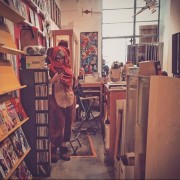