Finding a Love Without Borders in ‘Wild Zero’

Even at the end of the world—where aliens have created a zombie army shambling its way across Japan—the raw power of rock endures and is the only thing that can save us. That is just one of the mantras Guitar Wolf (the man and the band) screams at us in the 1999 B-movie classic, Tetsuro Takeuchi‘s Wild Zero.

There are a lot of strange, hilarious, and straight-up awesome sights and sounds within Wild Zero. Like, a lot, a lot. For the sake of not spoiling the fun for first-time viewers, I won’t give away more thrills than I need to. But with an entire film that could be gif’d to the heavens and one of the loudest, most unignorable rock soundtracks in existence, it is sometimes easy to overlook the characters—or at least the ones who don’t have “Wolf” in their names. This is a movie about leather-jacket rebels who wear sunglasses at night and fight supernatural forces with unspecified rock God superpowers, but it isn’t simply a movie about exploding brains into bloody chunks. It’s also about the sincere power of love that can make hearts burst into figurative chunks.

Our hapless main character is a sweet goober named Ace (Masashi Endô), a Guitar Wolf superfan who doesn’t know how to play guitar, grooms his pompadour with a comb he probably stole from his mom, and rides his motorcycle like a retiree on a Sunday afternoon. The men from the rock band Guitar Wolf—including Drum Wolf and Bass Wolf—are effortlessly cool, but Ace’s attempt to emulate them comes across more like a garage rockabilly version of the goofs from My Chemical Romance’s “I’m Not Okay (I Promise)” video. The scene selection menu even goes so far as to call him a “poser,” but that is a lot of his charm.

A man of many accidental feats of heroism, Ace first saves the band from an old-fashioned, Western-style standoff against the crooked, radioactive-hot-pants-wearing venue owner, Captain. Guitar Wolf cuts the back of their hands to form a blood bond and gives Ace a whistle to call them if he is ever in trouble. Later, when on his way to the next Guitar Wolf show, he stops a heist at a gas station by hitting the robber with the door on his way into the building. Sometimes it is better to be lucky than to be cool, calm and collected. This incident is also where Ace first meets Tobio (Kwancharu Shitichai); they are both immediately smitten by each other.

After fleeing a horde of extra slow, Romero-esque zombies that had been turned by a nearby meteorite, our fledgling lovebirds take refuge in an abandoned building. Losing hope in their current situation, the pair kiss and Ace confides in Tobio that he feels uncool, useless, and nothing like his idol—but that he is thankful that the two of them are together in the end. Tobio says Ace’s name as the camera cuts to her, radiating like a divine goddess in this dreary room. The camera’s lens pans down Tobio’s naked body and then to Ace’s shocked face as he realizes she has a penis. He shrieks and flees to lock himself in a separate room as we cut back to Tobio, no longer glowing, as she stands dejected. 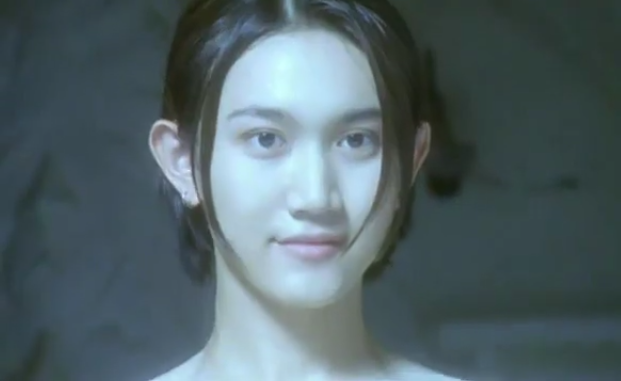 I have seen a lot of moments like this, both in movies and while standing in Tobio’s shoes. Straight up? It sucks. The immediate comparison that can be made for an event like this is with The Crying Game, sans any vomit. However, something that gets overlooked with The Crying Game is that outside of the initial reaction to the transgender reveal, it is a very beautiful and pro-trans film. The problem is that moments like that (and other similar ones) have been hijacked and parodied and now people who have never seen The Crying Game have an erroneous impression of what that title is about. It is the shorthand for being bamboozled by some sort of tricky “tranny.”

(For the record, I’m allowed to use that word. If you’re not trans, you are not.)

In that split second, Ace reacts to Tobio with the same fear he had for the zombies they were just running away from, and she realizes this dejection. Disheartened, she leaves the safety of their hideout and ventures out onto the streets with the other monsters. Eventually she makes her way back to the gas station where Ace had saved her (twice) and it’s a downright sad sight. Everything else in Wild Zero is absurd and tongue in cheek, but all of Tobio’s scenes after being rejected are completely straight.

Any good zombie movie needs to address the humanity of its characters, undead or not. That is, at least from where I sit, the most compelling part of the genre. Otherwise, it is just blood and brains and it doesn’t really matter who survives. The zombies in Wild Zero are semi-cognizant. They can talk and even feel love towards each other, but Tobio’s reality is what anchors this fantasy and the movie is so much better off for it. She doesn’t have the fun or flashy moments that other characters do, but Wild Zero wouldn’t be the same without what she specifically adds to the story, and I don’t think I am saying that simply from firsthand bias. My heart goes out to Tobio or anyone who has ever been on the receiving end of a reaction like the one with Ace. That said, I don’t hold it against him for having a reaction like that.

After his freakout towards Tobio, Ace isn’t disgusted by the idea of her as much as he is shocked or disappointed—in that moment, I feel like that is fair. Reactions are involuntary, especially if you are surprised by something and even more so if you have been conditioned against what you now see. It is how you handle things after those initial moments that show someone’s better side. Ace still worries about and cares for Tobio.

In this time of confusion and turmoil, Guitar Wolf—either astral projecting himself or as a manifestation in Ace’s imagination—suddenly appears before Ace and screams the most memorable line in the movie for many of those that have seen it. “Love has no borders, nationalities, or genders!” 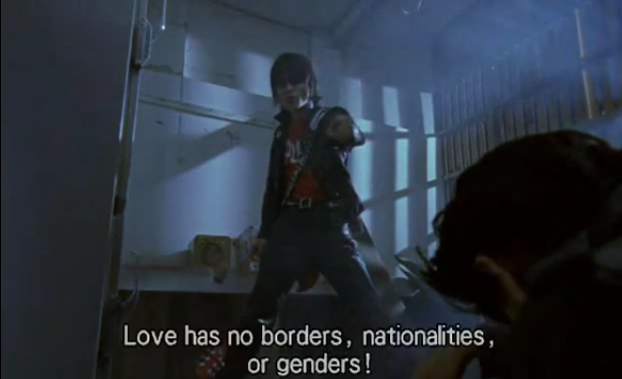 Not only is this hilarious in his delivery and directness, but it also shows that Guitar Wolf is an A+ ally that a lot of people could learn from. Whether the fictionalized or real version of himself, he declares the open endedness of love with the same intensity as the rest of his rock n’ roll wisdom and treats it as a fact. In the context of the film, this isn’t any form of performative platitude because it is just Ace and Guitar Wolf in that room and purely for Ace’s benefit. Outside of the film, Guitar Wolf stating this so emphatically is even stronger and encapsulates the true rebelliousness of rock. Fuck what other people think. Be yourself! A moment like this in a film like Wild Zero really shows that it is that easy to support people—whether it be someone like Ace or Tobio.

After his pep talk from the ultimate wingman, Ace arms himself with a crowbar and lets loose all of his feelings on the zombie horde—anger towards God for putting him through all of this crazy shit, and frustration with himself for rejecting Tobio instead of protecting someone he adores. With help from Guitar Wolf, he is able to make his way back to the gas station where he and Tobio first met and confesses his love. He faces his fears of the undead and his own feelings, so the two can live happily ever after.

It almost feels too obvious to be writing about the relationship in Wild Zero like this, but the film itself is very direct about its principles. I don’t want the takeaway from this piece to be about representation or queer visibility. Obviously, seeing a straight man loving a trans character is lovely but Wild Zero is a film about how straight people handle queerness and proves how truly easy it is to support us. Leading by example, Guitar Wolf and Ace—who isn’t gay just for loving a trans person—showcase how straight people should be talking to and teaching each other about love, courage, and rock n’ roll. Whether it be a couple of basic power chords or midnight movies, the simplest things can be turned up to 11 and mean so much more with the right attitude.

“I swear by my leather jacket and by Rock n’ Roll… I swear… I love you.” 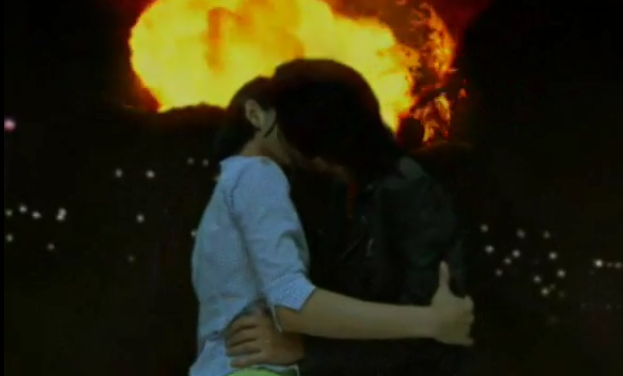